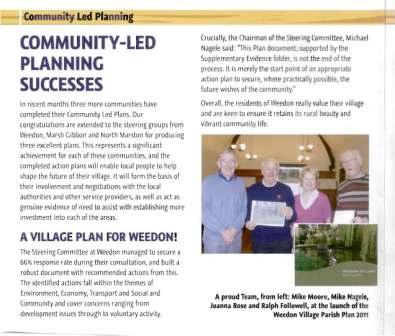 A note from the Chairman of the Steering Committee

The project to produce a Weedon Parish Plan has formally concluded. This was decided at the final meeting of the Steering Committee on October 13th 2011.

The Parish Plan has now been passed to the Parish Council, which itself commissioned the project in 2008, for its own consideration on the contents and actions recommended in the Plan. Several action points are already in operation.

The Parish Council formally adopted the Plan at its meeting on 16th November 2011.

For my part it has been an enjoyable exercise because of the enthusiasm shown by so many villagers. It would appear that the Plan has been well received.

I would like to thank all those who took part, in whatever way, for their contribution towards the Parish Plan. It was a great community effort by Weedon village.

Printed copies of the Parish Plan are available for purchase or are downloadable from here. Please contact the Chairman, Secretary or Treasurer for additional printed copies.